The voters are angry, fearful, and frustrated, and they have more ways to tweet, post, share, and otherwise disseminate these feelings than ever before, says communications strategist Jon Haber, an instructor for the Georgetown University master’s in Public Relations & Corporate Communications (PRCC) program and a veteran of five presidential campaigns. 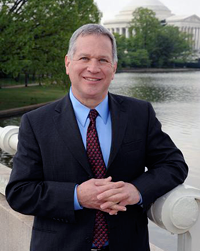 “Twitter’s just a megaphone. We all have megaphones now,” says Haber, President of Cascade Strategy Inc. in Washington, D.C. “Anybody can shout it out, and anyone with a smartphone can get access to it. Now, the vast majority of voting Americans have more information in their pockets than they ever had any time before.”

The changes that have occurred in the media since the 1980s have been breathtaking. Consider that when Ronald Reagan was president, there were roughly seven news outlets, print and broadcast, that the administration followed.

“The White House would sit around watching the evening news and then go home,” Haber says. “The news cycle was done.”

When Haber worked on the presidential campaign of Howard Dean in 2004, the former Vermont governor was seen as innovative for using the Internet to collect small donations, Haber said. Now, just over a decade later, such practices are essential to any campaign and go far beyond Dean’s experiment.

A Clear Message—and Many ‘Antagonists’

Haber and Maggie Gage, Head of Political Strategies and Head of Washington Research at Credit Suisse, teach Public Affairs: Developing and Managing Successful Campaigns at the Georgetown School of Continuing Studies. Haber says the voters’ anxiety stems from a sense that their world has been upended by rapid economic, cultural, and technological change.

“Every election has to be seen in the context of its time, and the public mood is much different than four years ago, when Barack Obama was running for reelection, or eight years ago, when he first ran,” Haber says.

In this year’s election, Donald Trump has far outshone the other candidates in terms of sheer media attention.

“He’s the perfect candidate for a time when voters are frustrated and angry, and when the media is so diffuse,” Haber says. “He understands how the media grabs the latest news, regurgitates it, and moves on.”

Trump also “has a way of talking that’s very clear, very understandable,” Haber says. “If I ask you to tell me what Donald Trump’s message is, it’s easy to say.”

A campaign’s narrative benefits from having one or more antagonists, Haber says. For Democrat Bernie Sanders, they are Wall Street and the one percent. For billionaire Donald Trump, they are the various groups that he claims are a threat to America: undocumented immigrants, the press, and public officials he disagrees with.

Once the major parties nominate their candidates, what will it take to win in November? Ultimately, Haber says, the task facing voters resembles the process corporate boards follow when they choose a new leader.

“Electing a president is the biggest personnel decision individual Americans will make in their lifetimes,” Haber says. “We are essentially choosing a CEO to run the country.”

Like selecting a CEO—or hiring anyone, for that matter—the choice ultimately hinges on three questions, Haber says: Can he or she do the job? Does he or she want the job? And finally, do I like this person? For example, could I envision accompanying this job applicant on a five-day road trip?

Develop the strategic skills to lead and thrive amidst the digital communications revolution.