Most of us have never known another world, yet the­­ one we’ve inhabited since 1945 is unlike any other in human history. In 2000, Dutch atmospheric chemist Paul Crutzen coined the term “Anthropocene” to describe an era in which, as Georgetown University’s John McNeill and Peter Engelke write in their new book, “humankind emerged as the most powerful influence on global ecology.”

Crutzen placed the origins of the Anthropocene in the 1780s, when coal emerged as the major fuel source for the Industrial Revolution. Others have proposed alternative markers: the Age of Exploration, for example, when exotic, and lethal, diseases were first passed to indigenous people in the Americas; or even that moment, as early as 1.8 million years ago, when early humans learned to control fire.

Scientists from several disciplines are still debating just when the Anthropocene started. But what’s more important for McNeill, a Georgetown history professor, and Engelke, a resident senior fellow at the Atlantic Council and instructor in the University’s master’s degree program in Urban & Regional Planning, are the profound, practical implications of the Anthropocene today, and particularly its last seven decades. That’s the period since 1945, when a number of indicators—among them world population, energy use, and average global temperatures—began their unprecedented pace of growth.

“The escalation since 1945 has been so fast that it sometimes goes by the name the Great Acceleration,” McNeill and Engelke write in The Great Acceleration: An Environmental History of the Anthropocene Since 1945. “Within the last three human generations, three-quarters of the human-caused loading of the atmosphere with carbon dioxide took place. The number of motor vehicles on Earth increased from 40 million to 850 million. The number of people nearly tripled, and the number of city dwellers rose from 700 million to 3.7 billion.”

These changes and their impact on the environment to date are documented in meticulous detail by McNeill and Engelke. (The book includes 35 pages of footnotes and a 13-page bibliography.) Yet what emerges is not so much a compendium of facts, but a compelling, and at times eloquent, narrative about the unique world human beings have created since the Second World War.

The Costs of Modernization 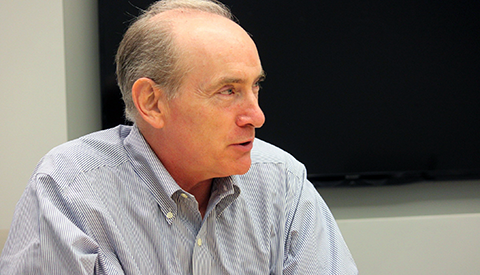 The book is divided into four chapters covering eight topics: energy and population, climate and biological diversity, cities and the economy, and the Cold War and environmental culture.

Examples of environmental degradation, and the human activity that caused it, are documented throughout. The authors describe the well-known effects of increased carbon dioxide emissions on the earth’s climate. But they also discuss less publicized calamities, such as the massive human and environmental toll that dam-building has taken in many parts of the world.

The Cold War was particularly tough on the environment. Nuclear weapons production in the former Soviet Union has made the area near Chelyabinsk in western Siberia “the most dangerously polluted place on Earth,” the authors write. And in every nation where the bombs were made, they produced toxic waste, some of which can remain “lethally radioactive for more than a hundred thousand years.”

That’s a period roughly equivalent to the years between 2016 and the time when “mastodons, wooly mammoths, and giant saber-toothed tigers roamed the future territories of the USSR and the United States,” the authors write, “while hominins were just beginning their migrations out of Africa.”

“This is a waste management obligation bequeathed to the next three thousand human generations. If not consistently handled adroitly, this will elevate rates of leukemia and certain cancers in humans, especially children, for a long time to come.”

The End of an Era

The good news about the Great Acceleration—and there is good news—is that it will end soon, or at least within a few generations. That’s because of many factors, including the fact that the human population, which burgeoned in the last 70 years due in part to better medical treatment and lower childhood mortality rates, is expected to peak in 2070 at about 9 billion. And, according to McNeill and Engelke, our ravenous consumption will finally subside.

“The Great Acceleration in its present form cannot last long,” the authors write. “There are not enough big rivers to dam up, enough oil left to burn, enough forests left to fell, enough marine fish left to catch, enough groundwater left to pump up.”

Yet the residue of the Great Acceleration will linger. The nuclear waste will remain, and so will the impact of our fossil fuel consumption, our burgeoning population growth, and our wholesale migration to ever-expanding cities. We can survive in the Anthropocene, McNeill and Engelke said, even if the ultimate quality of that survival is yet to be determined.

“First, human beings are highly adjustable,” McNeill said. “If any creatures are going to survive environmental trauma, we will be among them. No, we will not be doomed.”

The kind of life we pass on to our children and to future generations will depend on the actions we take now and in the near future. Historically, rising incomes and living standards have been accompanied by increased energy consumption—a lot of it. The average North American uses about seventy times the energy as the average Mozambican, the authors write. But it doesn’t have to be this way.

“The relationship does not have to be linear,” Engelke said. “Increasing wealth does not necessarily have to lead to the kind of consumptive behavior you seen in the United States. Danes are rich, but they live very differently than most Americans do.”

That means the field of urban planning will become even more critical in the coming years, as planners seek to better understand how people want to live, how they might live if given the opportunity, and how urban areas might evolve in ways that both sustain Earth’s resources and meet their needs.

“Build more Copenhagans and fewer Houstons,” McNeill said, referring to one of America’s most sprawling cities. And if the Houstons, Atlantas, and Los Angeleses of the world (as well as the more than 30 other metropolises around the globe that number more than 10 million inhabitants) are already built, which of course they are, work on transforming them to more closely reflect the needs of the 21st century.

“Adjustment to the Anthropocene, on every level, has only just begun…,” McNeill and Engelke write. “Now that climate is less stable and the Earth system is charting a new course never experienced before, thought and institutions will evolve in new directions more compatible with the Anthropocene. Since we cannot exit the Anthropocene, we will adjust to it, one way or another.”