On the day Martin Luther King Jr. gave the last Sunday sermon before his death, the “St. Louis Globe-Democrat,” reflecting a good portion of white opinion at the time, declared him “one of the most menacing men in America today.”

Today, if we think of King, it’s not the “menacing” man of March 31, 1968, but the celebrated “I Have a Dream” King from five years earlier, a sanitized and sanctified King who wanted only for black children and white children to join hands as “sisters and brothers.”

The Rev. Dr. Brad R. Braxton, who spoke at the D.C. Central Treatment Facility in April as part of Georgetown University’s MLK Initiative, didn’t come to the massive correctional center in Southeast to talk about the “Dream King”—or, more precisely, the “Dream King” as we have been taught to see him. He focused on the latter King, the one who preached that day at the National Cathedral in Washington, D.C., spoke of the need for “a world perspective,” railed against poverty at home and abroad, and excoriated America for its ongoing involvement in Vietnam.

“I’m not interested in the ‘Dream King,’” said Braxton, Ph.D., director of the Center for the Study of African American Religious Life at the Smithsonian National Museum of African American History & Culture. “I’m here to talk with you about the ‘Revolutionary King.’ I want to talk about the radical” who, four days after that speech, was killed by a sniper’s bullet on the balcony of the Lorraine Hotel in Memphis.

Each year, Georgetown’s MLK Initiative honors the legacy of Dr. King through a series of on-campus and community events. This year, Braxton’s “Teach the Speech” presentation coincided with a weekly lecture at the jail, which is part of Georgetown’s Prison Scholars Program. The event recreated the “Teach the Speech Teach-In” held on Georgetown’s Main Campus in January, which is hosted and facilitated by the Center for Social Justice Research, Teaching and Service and the Center for New Designs in Learning and Scholarship.

Launched in 2016 by the Prisons and Justice Initiative, the Prison Scholars Program offers noncredit and recently introduced credit-bearing courses, such as “Introduction to Philosophy” and “Democracy.” Some 50 incarcerated students are taking classes each semester, including 26 in the credit-bearing program. 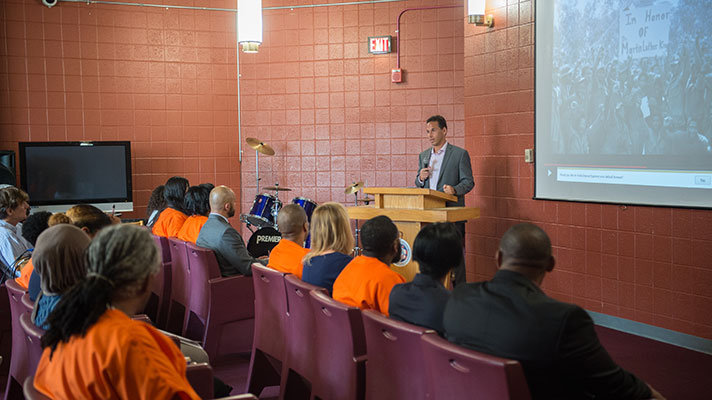 Braxton’s talk was more personal and emotional than the kind of academic presentation the students had come to expect. In addition to his academic work and scholarship, Braxton is an activist and a preacher, and he wanted the students to reflect on King’s words both intellectually and spiritually.

He began his lecture by citing a West African proverb—“Where there is no music, the spirit will not come”—and followed that by singing, acapella, the African American spiritual “Shine on Me.”

Sleeping Through a Revolution

King’s sermon at the cathedral was titled “Remaining Awake Through a Great Revolution,” and it came at a time when he was convinced, in the words of biographer Vincent Harding, “that there had to be a deep shaking of the foundations of the nation itself, perhaps a second American revolution in which economic rights and responsibilities will become at least as important as political rights and responsibilities.”

King used as a metaphor Washington Irving’s story of Rip Van Winkle, who famously went to sleep when England’s King George ruled the colonies and awakened 20 years later to find a new, democratic nation led by George Washington. Like Van Winkle, King said, “too many people find themselves living amid a great period of social change and yet they fail to develop the new attitudes, the new mental responses, that the new situation demands. They end up sleeping through a revolution.”

The several months before his speech had been fractious ones for the movement. The Poor People’s Campaign and March on Washington were criticized by some for being overly broad and straying from the message of civil rights. And, by speaking out against the Vietnam war, King had alienated some prominent white supporters.

King is viewed by many today as a one-of-a-kind superstar, yet we too rarely give credit to the African American community that molded and nurtured him, Braxton said: “Dr. King came from a community and a tradition that shaped the world.”

One of the students asked if King might have avoided his violent death by toning down or softening his rhetoric, but Braxton said that “if your life is the currency that’s going to change the world,” such a shift would have been impossible.

In the speech, King answered a related question, which he said was being asked of black people and their allies in the white community: “Why don’t you slow up?” The question presupposes—incorrectly—that time is “neutral,” King said; but that is not the case, and, in reality, those on the other side “have used time more effectively than the forces of goodwill.”

“Somewhere we must come to see that human progress never rolls on the wheels of inevitability,” he said. “It comes through the tireless efforts and the persistent work of dedicated individuals who are willing to be coworkers with God.”

In the same vein, Braxton challenged those in the audience to use their time wisely—whether they would drive home after his presentation or remain at the jail.

King spoke often of the horrors of slavery and segregation, and of America’s duty to recognize its guilt. But he also talked about the need for “mutuality,” the idea that ultimately there are no definitive “haves” and “have-nots” in the world, and that no one, anywhere, succeeds alone.

“I need you,” Braxton told the group. “I’m here because I need you.”

He ended by singing the first lines of “Down by the Riverside.”