Washington Justice VP Is Making His Mark on the Esports Industry

As a teenager growing up near Detroit, Grant Paranjape would play five hours of video games a night with his friends—and this, he explains, was a good thing.

“It taught me all my time management skills,” says Paranjape, Vice President of Esports Business at the Washington Justice, one of 20 Overwatch League teams from around the world. “I would come home from school at 3 p.m., and I had to get all my homework and studying done” before joining friends online at about eight. “I fully attribute all my good grades and academic success to World of Warcraft. It was basically a kind of part-time job that taught me accountability to a group and some of the very core tenants of working with a team at a very young age.”

And his parents, both Ph.D. economists—did they agree? Did they realize that the skills young Grant and his friends were learning while obliterating evil orcs and trolls of the Horde might one day lead to a job in a hot new business sector that is expected to reach $1 billion in revenue this year with projections as high as $1.8 billion by 2021?

A Passion and a Career 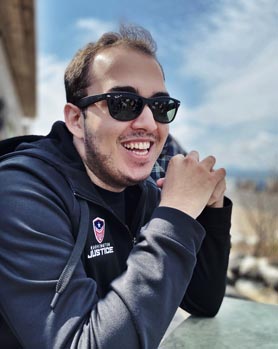 What’s it like to make your pastime—your passion, really—your career? To work in an industry that’s growing so fast that nobody really knows what it will look like in two years, let alone five or 10?

“I love it. There are no rules,”’ Paranjape says, from the Justice’s eighth floor office in Rosslyn, Virginia, overlooking the Washington Monument. “I like that there’s no set way of how they’ve been doing this for the past 20, 30, 40 years.”

Introduced by Blizzard Entertainment in 2014, Overwatch is one of the most profitable video games on the market. It’s a “team-based, multiplayer first-person-shooter game,” meaning a single player assumes the identity of one of about 30 Overwatch “heroes” and attempts to eliminate opposing heroes while achieving certain objectives each round.

The game’s plot and backstory are pretty complicated; but briefly (very briefly): It’s set in the future after a malevolent strain of robots—maliciously provided with Artificial Intelligence—begins destroying civilization. There’s a struggle, then more bad things happen.

A group game with six-player teams vying to complete missions such as escorting (or attacking) a convoy or capturing an enemy’s flag, Overwatch was a perfect vehicle for launching an esports league—the Overwatch League—in 2018. Now Paranjape and the Justice, as well as 19 other teams from the United States, Canada, China, and South Korea, are preparing for season three, which will run from February to August.

Each team needs at least eight players—six starters and two subs—as well as three or four coaches. Unlike esports leagues like NBA 2K, which pays all its players the same salary, Overwatch players are compensated by their individual teams at a league minimum of $50,000, plus any additional money the team negotiates. As in traditional sports, there is free agency, and top players can command salaries of $200,000 or more.

Most of the revenue comes from the sponsorship of big companies, well-known brands such as Coke, State Farm, and MasterCard that are eager to reach the games’ core audience.

“Brands are eager to be involved with esports, because esports fans are in the 18- to 34-year-old demographic,” says Paranjape, who serves as a Capstone, or thesis, advisor for Georgetown University’s graduate program in Sports Industry Management. These consumers are “slightly more educated, slightly more affluent, and they respond positively to brands entering into their space in a meaningful way.”

Jordan Zelniker, like Paranjape an avid video game player since high school, concurs. A recent graduate of Georgetown’s Sports Industry Management program (where Paranjape was his advisor), he says companies are increasingly looking to esports to strengthen their brands.

“Sponsorship is huge,” said Zelniker, who joined Monumental Sports & Entertainment in September as Manager of Esports Business Operations. “It gives esports a connection with the millennial generation and a younger audience. They find that esports builds a young, hip, cool brand.”

It wasn’t always this hip. Paranjape remembers high school, when video-game players like himself and his friends, once seen as just nerdy, were starting to be viewed as nerdy and cool. And, as the games kept getting more popular, so did the coolness factor, attracting the attention of some pretty big sponsors, so that by the time Paranjape reached ninth grade he was skilled enough to be making a few hundred dollars per month in endorsements.

“We were just excited that companies cared about us and wanted to be involved,” he said.

Paranjape got really good, like, nationally-ranked good, but he wasn’t thinking of video games as a career—at least, not yet. He attended Tulane University on an academic scholarship and graduated in three years with a degree in neuroscience. He thought about becoming a doctor but wasn’t thrilled by the idea of spending four to six more years in school. So he returned to Tulane for his MBA, but business—traditional business, that is—didn’t seem to be the best fit, either.

His entry into esports business came with an offer from Splyce Inc., a Rochester, New York-based esports team that manages teams across a variety of titles ranging from League of Legends to Call of Duty. From there he moved to Monumental Sports & Entertainment in Washington, D.C., for more than a year, and then on to the Washington Justice in May.

Last year, the Justice played all of its games in Burbank, California, but this season the league is starting something new: home games. This coming season, the Justice will play five home games: Three at The Anthem, the innovative new auditorium and music venue at Washington’s Southwest Waterfront, and two at the brand-new Entertainment and Sports arena, operated by Events DC and home to the Washington Mystics and Capital City Go-Go.

“It’s really challenging to cultivate a local fan base when the team is not based in the area where they play, but esports never had this,” Paranjape said.

This season the Justice will be able to sell tickets to home games and arrange entire weekends of activities around the event in a format known as homestands. (Think Super Bowl weekend on a smaller scale.)

An Ambassador for the Sport

Why do people like to watch other people play video games? For the same reason they like to watch professionals play any sport: To witness the kind of expertise that most of us can only dream of, and maybe pick up some tips along the way.

Despite his considerable talents, Paranjape wasn’t quite good enough to become a pro player himself. “Your odds of going pro are, statistically, pretty low,” he says. But he’s found his niche on the business side.

Now he considers himself an ambassador for the sport. He loves explaining the game, the league—indeed, the entire esports phenomenon—to anyone who’s interested, and has the friendliness and enduring patience to guide even a rank neophyte through his first game.

“Am I dead yet?” the newcomer asks, after all of two minutes.

If this is painful for Paranjape, he doesn’t say.

“No, you haven’t left the safe zone.”

In fact, no one actually dies in Overwatch; you’re “eliminated,” only to be “respawned” a while later. And, as critics have noted, it eschews the brooding, dark-hued gamescapes of other fantasy games, opting instead for a bright, cartoon-like palette and characters that are more fun than ferocious.

“There’s so much room for creativity, for just making your mark on something,” Paranjape said. “How often do you get to make your mark on an entire industry?”