When the talk turns to Bismarck or the Peloponnesian War, the veterans are all over it, said Alyssa Rashaw, a student and administrative assistant in the Bachelor of Arts in Liberal Studies program at Georgetown’s School of Continuing Studies (SCS). About 40 percent of Bachelor of Arts students are veterans, and they bring both specialized knowledge and real-world experience to the program.

“The students are very determined and competitive, especially the military people, who are compelled to go for the top grades,” Rashaw said. “It’s an environment that will really push you.”

Why are these goal-oriented veterans and other ambitious professionals pursuing degrees in liberal studies? Two reasons: first, the liberal arts, once a catch-all for otherwise “undeclared” students, are much more rigorous than they were a generation ago; and second, the job market itself has evolved, with new careers requiring creativity, broad knowledge, and the ability to fit disparate pieces of information into a coherent whole.

Liberal Studies includes history and philosophy; literature and sociology; art, anthropology, and religion; and the list goes on. The key is not simply the breadth of subjects, but rather their integration into a larger structure or narrative. In our information-laden, Internet-obsessed society, we are inundated with facts, but lacking in context and short on wisdom. Liberal studies, the modern successor to a classical education, seeks to reassemble this fractured world for the benefit of students and the society they are expected to serve.

We tend to think of job-training as preparation for a specific career, which, of course, it can be; but increasingly, the new jobs being created—those that can’t be shipped overseas or done by a computer—demand a breadth of knowledge and nimbleness of thought that are the very foundation of a liberal education.

As Kiernan put it: “Critical thinking, critical review, and critical expression are all fundamental skills in the workplace. They’re not overtly workplace skills, but they’re in every workplace.”

His words are backed up by employers themselves. According to a Hart Research Associates report cited this year by the Association of American Colleges & Universities, 91 percent of employers “agree that for career success, a candidate’s demonstrated capacity to think critically, communicate clearly, and solve complex problems is more important than his or her undergraduate major.” 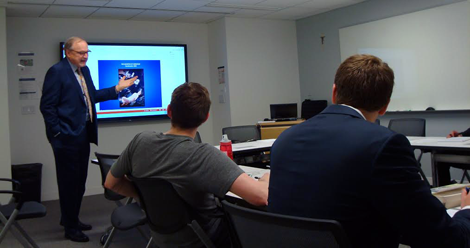 Dr. Gregory Havrilak and his students discuss the role of biblical interpretation across regions in his Politics and World Religions class.

Who pursues a bachelor’s degree in liberal studies? By definition, they aren’t “traditional” students. They’re older, about 34 years old on average, but might range in age from their 20s to their 60s. And many have had a break—sometimes significant—in their education.

“The students come to the class with a serious desire to read, to study, to learn, and to pick up some of the things they may have missed before,” said Gregory Havrilak, an authority on political theology who has served in many international capacities, including as a senior religious advisor for NATO and a chaplain for the Multi-National forces in Iraq. “They’re like sponges. They want this new epistemology.”

Rahul Singh, 33, graduated from Thomas Jefferson School for Science and Technology, a highly competitive public high school in Virginia. He liked the challenges there, but his college work didn’t interest him, and he bounced around between colleges and jobs before enrolling in the Bachelor of Arts in Liberal Studies program in 2013.

It was Mark Gray’s class “The History of the Future” and Singh’s Capstone project, “The Future of the Internet,” that rekindled his interest. “I found I wanted to learn how to learn,” Singh said. “I wanted to gain a worldview of how things work.”

Singh is now CEO of Anant Corporation, an Internet architecture and strategy firm he founded that helps businesses and other institutions manage their data.

A Journey Through Western Civilization

“The core of the program is a set of 12 classes that bring you through the sweep of Western Civilization from the antiquities to the present,” Kiernan said. “It’s a set of courses that view each era as an integrated whole, looking at the literature, the philosophy, the theology, the science of each era. So that by the time you are done, you are so thoroughly stepped in Western history and tradition that you can engage in the many important debates going on in society right now.”

Student John-Mark Gladstone, 29, a Marine Corps veteran, is attracted to the program’s sense of purpose. A native of Ghana whose family emigrated when he was 17, he served two tours in Iraq before retiring to work on security issues for the Office of the Vice President.

In Washington, D.C., Gladstone said, he sees many people who are “overambitious for no reason.” That was one reason why Georgetown, and its Jesuit tradition of service to others, attracted him.

“One question I keep asking myself is, ‘How can I give back to where I came from, to Ghana?’” he said.

Another veteran, Theresa Hilsdon, 39, served in the Navy for eight years and is now a federal employee. A 2013 bachelor's graduate, she said the analytical skills she’s gained from the program have been invaluable at work, where her ability to synthesize large quantities of disparate information has been noticed.

“My career has literally started to move at light speed,” she said.