Instructor Clay Black, Executive Creative Director at Edelman D.C., passed out the assignment to students in the master’s in Integrated Marketing Communications (IMC) program at Georgetown University. Each page had a blank space for their sketch and some important rules at the top.

“YOU MAY NOT USE WORDS,” the rules said. “No tagline, no body copy. Nothing except the product logo.”

Then Black gave the students one more piece of advice: Don’t spend too much time on the drawing itself. “It’s not about what it looks like. It’s about the idea.”

They had maybe five minutes—five minutes to come up with “The Big Idea.”

From ‘Critical’ to ‘Creative’ Thinking 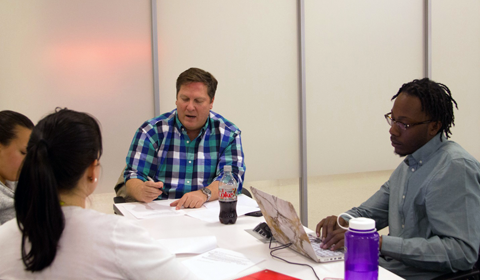 Instructor Clay Black working with the students on the “Search for the Big Idea.”

At Edelman and earlier at Leo Burnett Advertising in Chicago, Black has worked on some of the world’s biggest brands, including the U.S. Army, Disney, Proctor & Gamble, Kellogg, and Allstate. His class at the School of Continuing Studies (SCS) is called “In Search of the Big Idea,” and one thing you learn from attending it is that finding that Big Idea—or even a pretty good medium-sized one—is a lot tougher than it looks.

Think of famous advertising slogans, like McDonalds’s “I’m Lovin’ It,” Apple’s “Think Different,” or Nike’s “Just Do It.” They seem so direct and straightforward, as if they were simply plucked from the air in that first, fleeting burst of inspiration.

A nice thought, perhaps, but that’s not the way it works.

“The first thought? We call it ‘first think,’” Black said, “and it’s low-hanging fruit.” (And not very tasty fruit, at that.) “It’s more linear thinking as opposed to lateral thinking.”

Also called “critical thinking,” linear thinking is essential for success in school and in life, but it’s not enough for coming up with the Big Idea. For that one needs to question perceptions and assumptions, go beyond basic logic, and think more broadly.

No One Right Answer

Student Diana Delgado said she was initially surprised that creativity could be taught.

“Most of what we learn in school as young kids is critical thinking,” she said. “Or we are forced to memorize concepts or equations and then regurgitate them. I like that this class focuses on lateral thinking and building upon ideas, so that there isn’t just one right answer.”

For their second exercise, the students came up with Big Ideas for one of three brands: Sharpie, Haagen-Daaz, or Winnebago. The catch? It couldn’t be a TV commercial or a print ad—just a news release announcing some novel activity involving the product. The idea was that if the activity was interesting enough, it would be picked up by social media.

That kind of creativity wasn’t as necessary 20 or 30 years ago, when audiences were pretty much captive to whatever advertisers sent their way.

“Nowadays, we have thousands of places to go for information. People might be watching television, but they’re also on their iPhones and tablets,” Black said. “We have shortened, ever-decreasing attention spans. So how can a brand get your attention and hold on to it long enough to communicate what it’s trying to communicate?”

The students came up with some clever ideas, like parking a Winnebago in New York’s City’s Central Park and having a family “camp out” there. Delgado envisioned a traveling Winnebago reality show, a sort of Survivor on wheels in which one contestant gets voted off the vehicle each week.

“You guys really nailed this one,” he said.