Sober, academic, and research-based, the Global Risks Report does not deal in hyperbole or fear mongering. So when the authors of its 2016 edition noted “a forceful departure from past findings,” they were clearly seeking to get policymakers’ attention.

The report, published by the World Economic Forum, said that risks it has been warning about over the past decade “are starting to manifest themselves in new, unexpected ways and harm people, institutions, and economies.” It mentioned climate change and cybercrime as prime examples, but readers interested in a more complete accounting could peruse a list of 29 diverse threats, from “extreme weather events” and “large-scale terrorist attacks” to “profound social instability” and “financial crises in key economies.”

For a variety of reasons, including urbanization, population growth, and rapid advances in technology, today’s threats are bigger, more complex, and more interconnected than ever before. To deal with this complexity, said Laura Olson, a Senior Consultant in Disaster-Recovery Planning and Coordination for the United Nations Development Programme, the next generation of emergency managers must have more education and an ability to see the big picture.

“Emergency managers of the past were one-dimensional,” said Olson, who also teaches for the Georgetown University executive master’s degree program in Emergency & Disaster Management (EDM). “Now, they need a richer skill set.” 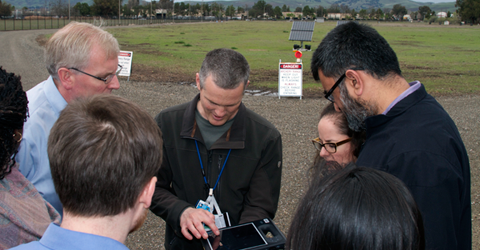 While highly competitive, the field is also expanding and diversifying to include a much wider range of positions in business, government, domestic nonprofits, and global aid organizations. For those who want to succeed in this field and advance, a strong mix of education, training, and experience is essential.

“The world of emergency services and emergency management and disaster management has grown much more complex in the past 20 to 30 years,” said Jeffrey Stern, State Coordinator at the Virginia Department of Emergency Management and an instructor in Georgetown’s program.

“Training is for certainty, and education is for uncertainty,” Stern said. “And we are facing a more complex and uncertain world, which is why a broad education is so vital.”

The world is now more interconnected. The spectacular growth of digital technology has linked people across the globe as never before. While this has improved lives and standards of living, it has also led to what the Global Risk Report calls “the phenomenon of the (dis)empowered citizen,” who can use technology to find information and organize others who “feel disenfranchised by distant elites.” The recent terrorist attacks in Paris, Brussels, and San Bernardino, California, are all grim reminders of this phenomenon.

The complexity of 21st century life has also blurred the distinctions between natural and manmade disasters. “Now, they play off each other,” Stern said.

An example is the earthquake that struck off the Japanese coast in 2011. The resultant tsunami caused meltdowns at a nearby nuclear power plant, forcing the evacuation of hundreds of thousands of people. What began as a natural disaster had morphed into a technological one.

A Need for Broad-Based Knowledge 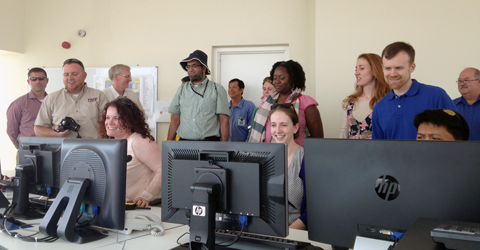 There are five phases in the emergency management cycle: prevention, protection, mitigation, response, recovery. In the past, it was sufficient to specialize in just one phase. However, today a working knowledge of all phases is required, Olson said, and particular emphasis is being placed on mitigation, “so we’re not in a perpetual mode of building and recovery—we try to do it well once.”

Students need “an education that turns them into 3-D emergency managers—people who are able to grasp complexity and solve problems from that big-picture view,” Olson said.

Georgetown’s emergency management master’s degree is designed for entry- and mid-level industry professionals, career changers, and recent graduates, and can be completed on the SCS campus, online, or through a combination of online and on-campus classes. Students may attend either full- or part-time.

In addition, Georgetown offers an executive master’s for industry leaders with six or more relevant years of experience. A one-year cohort course that begins in the fall, it also includes five on-site intensives. For the 2016–17 cohort, these sessions will be held twice in Washington, D.C.; once in Livermore, Calif., site of the Lawrence Livermore National Laboratory; once in New Orleans, Louisiana; and once in the United Kingdom.

Both EDM degrees seek to prepare students for a complex and challenging profession that will only grow in importance in the years ahead.

“We don’t know what the future will bring,” Stern said, “which is why getting an education that helps you understand the technology, the policy, and the politics of disaster is so important.”