When you’ve got Superman pitching your product, what more could you possibly need?

The answer is: not much—if it’s 1956 and you’re shooting a black-and-white TV spot for Kellogg’s Corn Flakes.

In the commercial, the television superhero (disguised as mild-mannered reporter Clark Kent) learns that colleague Jimmy Olsen is suddenly out of Corn Flakes. So Superman ducks into a room off camera, dons his iconic garb, zooms in to deliver a spanking new box—and returns as his former, somewhat boring, self for a quiet meal with the cub reporter. 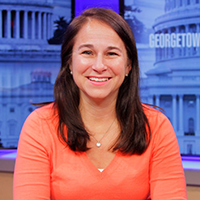 That approach might have worked 60 years ago, but marketing in the post-millennial world is no longer that easy, said Wendy Zajack, Faculty Director for the master’s program in Integrated Marketing Communications at Georgetown University’s School of Continuing Studies. And yet, in many ways, it’s more exciting.

“We’re in a highly competitive environment in terms of getting your brand out there,” said Zajack, who has worked in global communications for several large technology companies. “We get literally bombarded with messages. To succeed, you need to use all the channels available to you. And you want to think about your strategy in the biggest and broadest way possible.”

Back when that Superman ad appeared, the media environment was more limited, less fractured. Most everyone watched the same three or four television channels and read their hometown newspapers. An ad campaign like the one Kellogg conceived, which leveraged viewer interest in the popular TV show, could be counted on to reach its target audience.

Today, we have access to hundreds of television stations. And, if we want, we don’t have to watch TV at all, but can retrieve everything we need in news and entertainment from the internet. With multiple social media platforms to choose from, we’re not content with one-way conversations; we want to provide feedback and commentary on everything from the music we like, to the political causes we support, to the restaurants we frequent, to the clothes we buy and wear.

“We don’t make distinctions or confine ourselves to one channel,” Zajack said. “We may read something as a news story, then see it on a Facebook post. We’re consuming this content holistically, and that helps us develop a relationship with that brand, that idea.”

Hence the word “integrated” in the still young but growing field of IMC. Regardless of the form an organization’s messages take, they should all be connected to a clearly defined and constant theme. And, in order to make that happen, the various communications divisions within an organization—such as public relations, advertising, and marketing—should be similarly integrated and not siloed.

Winning Campaigns, Both Earnest and Silly

Zajack pointed to Dove soap and its highly successful Dove Campaign for Real Beauty, which began in 2004 with a series of billboards showing photographs of regular women (not models) that included captions like “Fat or Fab” or “Wrinkled or Wonderful” and invited viewers to choose. That effort grew into a worldwide campaign challenging stereotypical definitions of beauty that result in women and girls becoming overly critical of their appearance. Among the many facets of the campaign were videos, print and TV advertisements, and the creation of a Dove’s Self-Esteem fund that supports research into the problem.

On the men’s side—and on a much lighter, satirical note—Old Spice rejuvenated an outdated brand by introducing a hilarious TV commercial featuring actor Isaiah Mustafe as the buff, ripped, and absurdly pompous “Old Spice Guy.” Clearly a Superman in his own mind, Mustafe’s character went on to star in another commercial for the brand’s body wash and record an astounding 186 personal video messages responding to fans’ online questions and comments.

Marketing and advertising have come a long way since the Kellogg ads of the 1950s. Whether serious or playful, the writing today is more edgy, the production values light years beyond the days when Supermen “flew” through studio skies. Today, there are many more ways communicators can reach their audience, but a lot more “noise” to cut through as well.

One thing that hasn’t changed, however, is the importance of establishing an enduring brand, Zajack said. Those Superman ads may have been clunky, but they accomplished their goal. It’s just a lot more complicated now.