It’s not easy to define the “typical” liberal studies student. At Georgetown University, the undergraduate liberal studies program reaches out to a broad section of people of all ages and occupations, including military veterans, and those with various levels of college experience.

They do have one thing in common, however: They all want to complete their baccalaureate degrees.

“I didn’t realize it would be liberal studies,” says Gina Macklin, who has two associate degrees and nearly 20 years of work experience. “I just wanted to finish what I’d started—have my bachelor’s degree and go beyond it if I could.”

Once in the program, Macklin found that liberal studies offers not only a sweeping review of Western intellectual history, but that it does so through a “values-based curriculum” that is concerned with the development of what the Jesuit university calls the “whole person” and not simply a student’s intellectual side.

That focus resonates with Macklin, who attends an African Methodist Episcopal (AME) church and wanted her undergraduate experience to help her change as a person even as she pursued her bachelor’s degree.

“I wanted something that would give me more than just an academic experience,” she said. “I wanted to stretch, not just academically, but spiritually.”

For the past eight years, Macklin has been an administrator at Anne Arundel Community College. Recently, she moved to a new position as coordinator of college services at the college’s Arundel Mills campus. She said that learning about history, philosophy, and diverse cultures broadened her outlook and made her want to rededicate herself to seeing her students as individuals with unique goals and needs.

After being told by a transgender student that there were no gender-neutral restrooms on the college’s Arnold Campus, Macklin researched the issue as part of her coursework. Meeting frequently with her advisor, she designed a Survey Monkey poll of students; talked with the president of Vassar College, which has gender-neutral bathrooms; and finally, presented her case before Anne Arundel’s Community College’s Board of Trustees.

“Now we have gender-neutral bathrooms—two of them—on our campus,” Macklin said.

Trey Sullivan, assistant dean for liberal studies, said that, early on, he has a sense of how a particular student could benefit from the program—and give back as well.

“In everything she says, from the words she uses to the look in her eyes, she practices hospitality,” Sullivan said.

Planning for the Future

Sullivan met Macklin and Chad Larkins, another student, at a “Meet and Greet” designed to familiarize potential students with the program. All the students want to complete their degree, and many are impressed with the Georgetown name. But in Macklin and Larkins, Sullivan saw more.

“He came to us with this foundation, this reflection,” Sullivan said of Larkins, a contractor who would be returning to school after more than 20 years. “There’s a kindness about him; there’s an openness.” 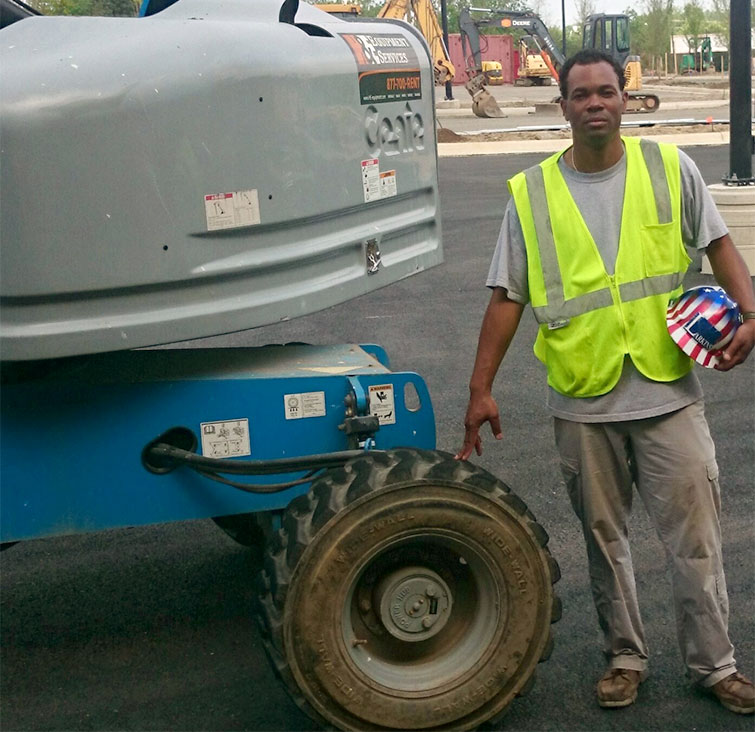 Larkins has run his own construction management business—the Larkins Company—for the past 19 years. But after all these years, he sees that now would be a good time to prepare for a second career, perhaps as a lawyer specializing in the same kind of legal issues that he and other small contractors face. One of the toughest of these issues is also among the most basic: not getting paid.

“You’re only one or two jobs away from being bankrupt if people don’t pay you,” Larkins said.

That is why, four years ago, Larkins began transitioning from private sector clients to working primarily for the federal government and doing construction on U.S. military bases.

There are also other factors to consider.

“I’m 43,” Larkins said, “and I don’t want to be hanging off the sides of buildings for the rest of my life.”

Larkins says that he was an unfocused, lackluster student earlier in his life, but that has all changed. Maturity and work experience will do that.

“Now I can focus on my education,” he said. “I don’t have the distractions that I would have as a younger student.”

“I love the program,” he added. “It’s an excellent experience. I like that it’s very convenient for an adult learner.”