What the Death of DC’s Streetcars Can Teach Us Today

“How did you get here tonight?” might sound like an unusual way to start a lecture, but in John Hillegass’ case, it made perfect sense.

Hillegass, who is pursuing his Master’s in Urban & Regional Planning at Georgetown University, was delivering the Capitol Hill Restoration Society’s Fifth Annual Dick Wolf Memorial Lecture at the Hill Center on Capitol Hill. He asked visitors in the lecture hall, and those watching a video feed in an adjacent room, for a show of hands. How many walked or biked? How many took Metro?

And, finally: “Did any of you get here by streetcar?”

Of course, no one raised their hand. Because, like so many cities in the United States and Europe in the mid-20th century, Washington once had a thriving streetcar network, one that carried 338 million passengers in 1946, but it was dismantled 16 years later in favor of new technology and calls for a more efficient system.

“Like many of the great tragedies in urban planning history, it starts with the automobile,” Hillegass said. “As automobiles flooded the streets, planners were scrambling to find solutions to the unbearable congestion. Rather than blaming the root causes of congestion—the car—they found a scapegoat in the streetcar… Of course, it made logical sense: The streetcar takes up space on the road and blocks, or gets blocked by, cars. So if we remove the streetcar, it will solve our traffic congestion.”

The Lure of Technology

The new technology of that day was the bus, which, Hillegass said, “promised faster, cheaper, more reliable transportation and was seen as the future of transportation.” 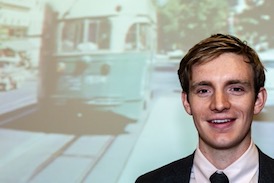 Hillegass described the many episodes that resulted in demise of the streetcars: Its takeover by Louis E. Wolfson, the corporate raider of his day who bought the District’s streetcar company in 1949 and began hiking fares while refusing wage increases for workers; the seven-week strike that followed; and Congress’ eventual passage of bills that would pave the way for a new owner of the weakened system, but with a mandate that all streetcar tracks would be removed in seven years.

Congress’ intention was not directly stated, Hillegass said. But by reviewing newspaper articles from the time, those intentions became clear.

“The conversion to buses was supposed to ease congestion, speed automobile traffic, and create a more reliable, affordable, and faster transportation system,” he said.

It didn’t turn out that way, and Hillegass spent the second half of his lecture documenting why, citing lessons we can learn from that experience today.

“Whenever you make plans, even if it is plans for a drink with friends or colleagues, you want to definitively answer these six questions: who, what, when, where, why, how. When you are making a policy decision that affects everyone in a metro area, you definitely want to answer these questions.

One small example: Citizen groups along the Glen Echo line asked to be exempted from the dismantling plan because their line didn’t even run in the street.

“It did not matter and the plan moved forward,” Hillegass said, pointing to a slide of one of the many historic photos he included in his presentation. “Here you can see the crews removing the tracks along the Glen Echo line.”

Comparing traffic metrics from the 1940s and ’50s with those of the 2000s is an inexact undertaking, to be sure, but Hillegass was able to conclude that, by most criteria, the streetcars handled more riders, more frequently, and with less cost to customers than the transit options in the District today.

To cite just one example: “In 1956, after the prices had already doubled within 10 years, fares were only 20 cents, or 20 percent of the minimum wage,” Hillegass said. Today, depending on a host of variables, fares for buses or express buses range between 20 percent to 59 percent of the hourly minimum wage averaged across the region.

One lesson today’s leaders can learn from this history is what Hillegass called “the often-unappreciated wisdom of old infrastructure.” The mid-street loading platforms of the streetcar era slowed traffic and provided a refuge for pedestrians just like pedestrian islands do today. Most streetcar lines weren’t actually separated from the street but were concentrated in the center, a design similar that of the recently announced K Street Transitway.

While rejecting the “Luddite” approach, today’s planners need to “embrace a healthy skepticism of new technology,” Hillegass said. When considering new modes of transportation, such as Uber, Lyft, electric scooters, and autonomous vehicles, “we need to be asking the right questions to ensure new transit technologies complement our existing system, rather than replace it.”

“A better, faster, more reliable transit system is possible,” Hillegass said. “We had a better system before, and we can build one again. We have more technology and data available at our fingertips than ever before to design better systems. What that system looks like, I can’t say, but we know it is possible.”