In Light of Papal Visit, SCS Reflects on Refugee Crises, Past and Present

Sixteen years ago, in the spring of 1999, Havrilak was the Senior Religious Advisor to North Atlantic Treaty Organization (NATO) Airnorth and to the military attaché at the American Embassy in Paris. It was his job to inspect the sprawling camps to which thousands of ethnic Albanians had fled to escape the Kosovo War. 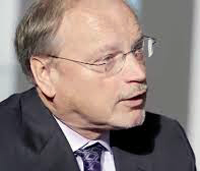 “Watching the news from Europe and seeing the thousands of refugees walking through fields and over mountain ranges conjures up memories of the refugee camps in Albania and Kosovo during the Balkan wars,” Havrilak said. “I was the senior religious and humanitarian officer on the ground, responsible for 14 refugee camps. In those camps, I saw in their eyes a sense of hopelessness: mothers begging for information on the whereabouts of their husbands or sons; children crying for their families.”

Some of the camps were well run; others were not, Havrilak said. But almost all of them were preferable to fleeing to the mountains, where food was scarce and the refugees were exposed to the elements.

Recently, Havrilak and Rev. Kevin O’Brien, S.J., Georgetown’s Vice President for Mission and Ministry, were asked to comment on the current migrant crisis in Europe and the Middle East. When asked how U.S. Catholics should respond, O’Brien pointed to the words of Pope Francis, who is currently on a trip to the United States, where he is visiting Washington, D.C.; New York; and Philadelphia.

“Pope Francis has often referred to the parable of the Good Samaritan from the gospels: two religious and devout people walk by a man beat up and left for dead on the side of the road, but another—the Samaritan—stops and helps,” O’Brien said. “That person on the side of the road is the migrant and refugee. We cannot walk by. So we look for ways to help.”

“The moral imperative then was very clear—as it is today—to help these people,” he said. “Whereas the moral imperative is apparent, the practical application, details, and obligations must be worked out by their respective governments.”

Havrilak joined Georgetown’s Liberal Studies program in 2008, after a long career in in both academia (he holds a Ph.D. in Systemic Theology) and in high-level human rights work in Europe. When the Kosovo War broke out, he was dispatched to the Balkans to work with Catholic, Islamic, and Orthodox leaders and non-governmental organizations in Albania and Kosovo on humanitarian, religious, and human rights issues. Among his responsibilities were inspecting refugee camps to ensure Geneva Convention compliance, securing protection of religious/holy sites from destruction, and ministering to Serbian Prisoners of War.

After the NATO bombing of Serbian forces in the spring of 1999, forces loyal to Serbian President Slobodan Milosevic expelled more than 800,000 ethnic Albanians from the country, most of whom fled to refugee camps in Albania. With a total prewar population of nearly 2 million, the percentage of Kosovans who fled is slightly less than that of the Syrian crisis today, but still enormous. To date, about 4 million Syrians—roughly half the population—have left that country.

“We will see a great deal of maneuvering in the weeks ahead by government leaders to address the crisis,” Havrilak said. “The European Union (E.U.) may agree on a system of quotas for member countries where large numbers of IDPs (Internally Displaced Persons) are arriving. However, quotas may not work equally well in all regions of the E.U., since people will naturally want to settle where the jobs are, or where some family members have already landed.”

Pope Francis has made his views on the refugee crisis quite clear, O’Brien said. 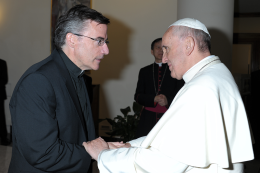 “Relying on a long tradition of Catholic social teaching, Francis and his predecessors have advocated for migrants, refugees, and displaced persons, based on the Judeo-Christian belief in the dignity of each human person as created in the image of God,” O’Brien said. “What is distinctive about Pope Francis is his emphasis. He has spoken repeatedly about forced migration and human trafficking. He has visited refugees in very public ways. His first visit outside of Rome as Pope was a trip to the island of Lampedusa off the coast of Italy, often the first destination for refugees fleeing North Africa to Europe.”

At an emotional Mass during that visit in early July, Francis noted that thousands had died trying to cross the Mediterranean. At that time, most of those attempting the trip from Libya and Tunisia were Eritreans and Somalis, though news reports spoke of an increasing number of Syrians as well.

Francis spoke of the “globalization of indifference,” a selfish attitude that had assumed global proportions.

“So many of us, and I include myself, are disoriented,” the Pope said. “We’re no longer attentive to the world in which we live. We don’t care about it; we don’t take care of what God created for all; and we’re no longer capable even of taking care of one another.”

By late summer, new tragedies were occurring on another sea route, this one from Turkey to Greece and involving mostly refugees from Syria and Iraq. On September 3, after estimates of the number of deaths at sea had surpassed 2,700 for the year, Hungarian Prime Minister Viktor Orban, a staunch immigration opponent, noted in a newspaper commentary that most of the refugees were Muslims and called on Europe to preserve its Christian identity.

Continuing conflicts in Syria and Iraq have forced millions of people to flee their homes. In Syria alone, more than 11 million people have been displaced—about 7.6 million within the country, and another 4 million in Turkey, Lebanon, Jordan, and neighboring states.

More than 432,700 migrants and refugees have arrived in Europe by sea this year, according to the International Organization for Migration; but thousands of others, among them many families with small children, have not survived the trip. After one disastrous attempt from Turkey in early September, the Greek Coast Guard recovered the bodies of 34 people, including 15 children, whose wooden boat had capsized in gale-force winds on the Aegean Sea.

Francis Calls for Solidarity with All People

A refugee crisis occurring thousands of miles away might seem remote to many Americans, but that is not how Pope Francis is asking it to be viewed, O’Brien said.

“The Catholic tradition speaks of solidarity—the conviction that every human being is our brother and sister because we are all children of God, created in God's image,” O’Brien said. “Solidarity demands that we care for others, regardless of race, ethnicity, religion, or geographical location.”

And O’Brien noted that America has a migration crisis of its own.

“Even as we focus on the current migration crisis in Europe, we cannot forget that we continue to face a migration crisis in this country,” O’Brien said. “So we may find ways to help Syrian and North African refugees, or we may focus our attention on migrants coming from Mexico and Central America. We can help by praying for migrants, advocating for them, and offering financial and other direct assistance.”